Jimmi here, hope everyone’s A-OK! Today I’m going to show you how to make a simple two part mold. You’d use this to cast complete 3D objects, such as a gun. This obviously makes this far more useful than the single part mold technique, which limits you to just casting one side of an object.

That said, make sure that you’re up to speed with casting a single part mold before you begin, my tutorial last week takes you over the details so I strongly recommend that you start there and go over the basics (such as the materials, and making a Lego box etc) before you read on. Go on, I can wait whilst you read that first and then come back!

You’re back already? Great. First thing to say is that this method isn’t perfect, and you’ll struggle to cast complicated things with heavy under hanging detail, for example, if you tried to cast a full soldier holding a two handed rifle across his body, you’d probably find that the space between his weapon and chest (see below) became one solid lump of material. But for relatively simple 3D shapes you should be rocking, so guns, limbs, heads, torsos, backpacks… all should be OK if you’re prepared to put the effort in. 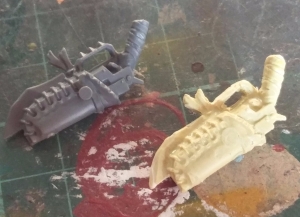 Not perfect, but not bad

Let me know how your attempts went in the comments below. Plus, if you’ve got advice on how to improve this technique, I’m always happy to learn more, so let me know!

If you want to read more content (And frankly, why wouldn’t you!) you should check out John’s guide to making wires and hideous sanity defying monstrosities.

When you cast copies of some company’s bits, you’re generally not allowed to sell them on. That’s a breach of copyright. Here in the UK, you can take casts of things as long as it’s for personal use only.

Check your local laws if you’re in any doubt, I’m washing my hands of any responsibility!!!

2 thoughts on “How to make a Simple Two Part Mold”