A while ago I had mentioned that I was looking forward to the release of Games Workshop’s Age of Sigmar Skirmish rules. Well lo and behold it arrived this weekend so thought I’d take a quick peak. 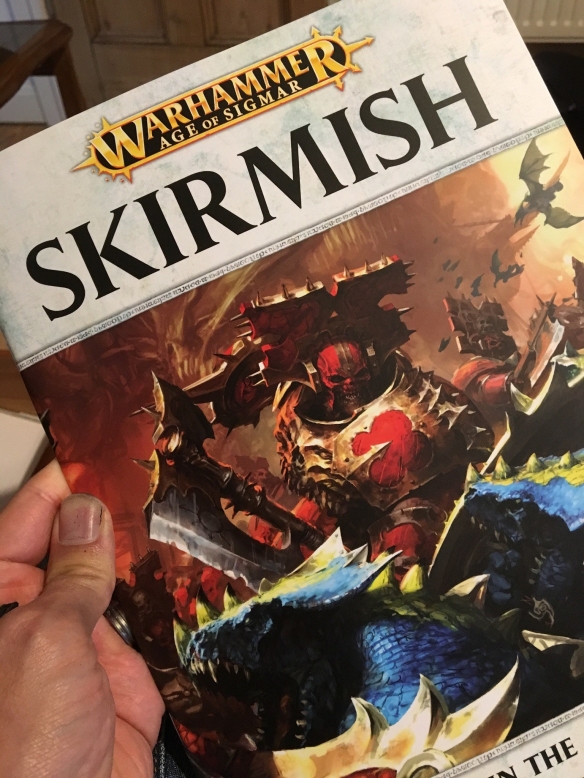 The rules come as a slim soft cover book that is roughly split into three sections. All gorgeously completed in colour with the usual great artwork and photography we’ve come to expect from recent Games Workshop publications.

The background helps set out the arena in which the game is taking place and sheds a bit more light on the shadowy realm of Death. In all the realms mortals try to scrape out an existence, yes even in the land of the dead. However the lands all have an effect on the mortals who live there. So in the land of death people live as drained husks trying to scratch out a living in the dangerous deserts that cover this realm. However the settlement of shade spire managed to prosper and shield its inhabitants from the draining power of death. I won’t go into more spoilers but things do not go well for the inhabitants of Shadespire as you can imagine for a group of people flaunting the law of Nagash. Given the future boardgame of Shadespire rumoured to be coming out towards the end of the year I think this may be a new story line that Games Workshop will be exploring in the future.

Games are designed to take place in the ruins (told you it didn’t end well for them) of Shadespire and heroes take their war bands into this desolate place to earn a name for themselves and possibly find ancient trinkets or war gear that might elevate them to the next conquering warlord of the realms.

The rules are essentially the same as the core Age of Sigmar rules. However each miniature acts individually and there is no summoning. Army composition is different to its sci-fi counterpart in that troops can be chosen from any unit, so if you want a few Skaven, some Plague Bearers and a sprinkling of Rotbringers this is your game. The war band must have a leader and you cant have behemoths (though a battle plan of escaping with treasure from the beady eyes of a zombie dragon sounds pretty good to me) but otherwise you can pick and chose to your hearts delight. There is also a new list of magical artifacts that you leader can receive after games. Warbands receive extra “renown” based on how they do and this can be used to recruit more warriors to your cause.

There’s a set of linked battle plans for a campaign in the rules but I suspect that quick (30-45min is slated) pick up games is where this system shines.

The start of my ghastly war band

I have chosen the force of Death to explore this city and pick on the bones of those foolish enough to invade. These Ghouls are my current progress and coming up next will be something a bit bigger, and some ways of painting the pox ridden skin which might be of interest for some as I believe there might be some Nurgle forces on the way for 40k fans soon…

Thanks for reading, see you next time