This post might seem a little harsh, so it’s important to know that this isn’t meant to be a personal attack on anyone, rather it’s supposed to make you a better player and RPGer in general. The below points have been collected mainly from talking to other DMs and thankfully only a minority of my own experiences (including times where I have committed the crime!)

So, disclaimer in place and without further ado…

This is so important – it’s literally the first thing you should be thinking about when you decide to play. A backstory might not seem like much, and it certainly doesn’t have to be mega detailed (just a few bits and bobs) but it cements your characters place into the world. It provides inspiration to the DM for plot arcs, and it gives them the opportunity to put your character in the limelight and make some sort of life-significant accomplishment.

Campaign’s which nod to your character’s history are cooler than a penguin’s arse. If you don’t have that, you’re in great danger of being a tertiary character in your own story.

If you have a kickass backstory, tell the DM all about it. Like right now. It’s no good to the campaign if you’re the only one that knows about it – the DM ain’t a mind reader afterall!

D&D is not a competition

If you come into D&D with a ‘win at all costs’ tabletop tournament attitude, there’s a pretty damn good chance that you’re not going to have a good time, or worse still, kill some of the fun for other players.

D&D should be a story, and all good stories have struggle, narrow victories, glorious defeat, and clever problem solving. If you’ve Min/Maxed, or made some ‘net list’ style over powered character, I urge you to think again. Seriously, who wants to play a game of D&D where the whole thing is just a walk in the park?

Don’t be afraid to ‘lose’, some of the coolest characters have heard about have been totally flawed, and these guys are so much more memorable than Captain perfect.

Do your prep work

Here’s one I definitely fell foul of as a player.

Not many folks are aware of the sheer effort that DM’s put into their campaigns. Maybe they were up all night reading and rereading the module. Maybe they spent hours all last week making terrain and props for you.

It doesn’t look great rocking up unequipped, not knowing how your character works, not having not leveled up when told, or not preparing your spells etc

Obviously there are exceptions, but if your only excuse is that you forgot, or couldn’t be bothered – you need to know that you’re breaking your DMs heart a bit there, and you should probably send them a card and a box of chocoloates or something 🙂

If you need help, speak up – I don’t think any DM worth their salt would scoff!

The DM isn’t your opponent, he’s your games arbiter and narrator. The task of DMing is challenging enough without players attempting to purposely derail the game.

Let me give you an example. If at the start of your adventure, you go see the king to get your quest, and you immediately try to kill the king… well nice one buddy, you just shot yourself, and the rest of the party including the DM in the feet.

That doesn’t mean you shouldn’t be afraid to think outside the box. Many DMs love the challenge of having to take an unexpected diversion and the opportunities that presents. If the DM put the baddie in a pub, expecting a fight and you responded by barring all the doors from the outside and then setting fire to the place. Awesome!

Be ready for your turn in combat

Obviously this excludes newbies, for whom allowances should be made. But if you’re the guy who slows the game down every combat whilst he rifles through the rules to find out what ‘Fireball’ does, you need to practice a little self awareness and do that stuff inbetween turns!

Actions in D&D combat represent a few seconds, and players that take ages to take their turns run the very real risk of the DM declaring that they stood and faltered for too long, missing the opportunity to act this turn.

Its easy for new players to do this, especially if they’ve already fallen foul of “D&D is not a competition”

In D&D, ‘you’ are not playing a character that has ‘your’ knowledge, or insight into the other players. For example, your character didn’t see the DM shiftily start making dice rolls behind the screen, nor was he part of the conversation your friend at the table just had with the DM when he said he was going to sneak into the temple at midnight when everyone else was alseep and nab the collections bowl.

Being able to correctly identify what you know, and what your character knows is hard. It’s even harder if you then have to act in a way that as a player, you know is against your character’s interests – but that’s what D&D is about – Yes that means that your Paladin doesn’t just happen to burst in through the temple door catching the party Thief in an act of divine larceny, but by not metagaming you open up an amazing potential story arc.

More importantly, you can be damned sure the other players won’t be impressed if you metagame to foil their own activities.

My character has an encyclopedic knowledge of the Monster Manual

Let me be clear, there is absolutely no problem with offering other players suggestions as to what they might do during combat, but you need to have the self awareness to know when you’ve crossed the fine line into just ordering them about.

Ask yourself, do you get frustrated when players don’t do what you suggest? Do you keep bringing up that time they failed doing something you didn’t agree with in battle?

If either of those answers is yes, you could be that bossy player. Remember “D&D is not a competition”, let the other players play – it could be that their character has a trait that means he makes sub-optimal descisions in battle, it could just be that the player solves problems in a way that is just alien to you. There’s no right answer in D&D, if their decisions lead to the group in game taking some punishment – great, what a story!

DM’s make mistakes all the time – the rulebooks are vast and heavy, but nothing kills the mood like an insubordinate player that argues with every call the DM makes.

If the DM has really done something that you think is wrong, speak to them about it after session, but for the love of God remember to be diplomatic, and consider the fact that the DM might already be aware that he didn’t follow the rules as written, and instead improvised something up that he thought fit better.

Remember, when the DM makes a call, this supercedes the rules. 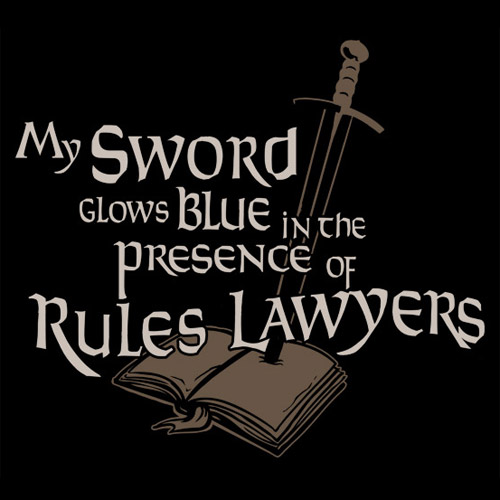 And my slap-hand is ever ready

Some people are shy, some are loud. Wherever you fall on that spectrum, you should never be using the force of your personality to talk over the other players.

If Dave is telling the DM that he wants to search the store room for loot, and is asking what he finds, let him finish his sentence before you blurt out that you’re doing the same. If Rob is role playing, talking to an NPC, and you’re impatient to move the game along… well, suck it up, let him finish.

You can be damned sure that the DM wants to stab you in the head with a fork if weeks into the campaign for the first time Ainsley opens up and starts role playing, you blurt out that you’re bored and want to get to combat already.

For the love of God, pay attention

There is a special place in hell for players that spend their in game downtime by building little structures with their dice. Nothing quite says “I’m not listening” than this activity, in addition, when said tower comes tumbling down – do you have any idea of how distracting that is for everyone else at the table? 🙂

When it’s not your go, leave your dice alone, put down your phone (unless you use a D&D app) and listen, or contribute. If you desperately need to keep your fingers busy somehow, try to be subtle – have a fidget spinner or similar under the table 🙂

So that’s it. I hope you enjoyed this and found it useful. If you have any comments to add, chuck them below the line – I’m interested to know what you think I missed, or if you disagree with anything I’ve said.