So several months ago Jimmi got me started on the idea of taking up kings of war by Mantic Games. Well as anyone who reads my posts will realise my rate of painting could be compared to continental drift but here I am with my first post. 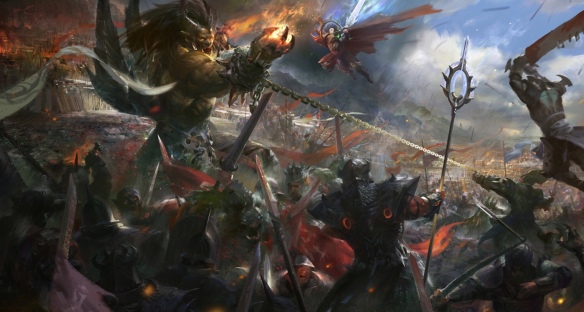 So why did kings of war attract me? Well without wanting to draw comparisons to a world that once was, fantasy battles was one of my first loves and so there was a certainly a square based hole in my wargaming life. The tactical manoeuvring of rank and file games combined with list building that doesn’t wholly rely on combining innumerable special rules is certainly a big draw. Of course the sight of rows of troops, banners unfurled, heroes mounted on fantasy beasts and giant monsters is certainly part of the appeal.

After much umming and ahhing I decided on ogres. The idea being they are a nomadic tribe coming down from the frozen wastes of Mantica in search of more hospitable area to live. As they are in the north I wanted to go for a pale colour skin colour and will be using a combination of Mantic and miniatures from other ranges.

So far I have managed my first hero and horde. I have a vague idea of the army list, some heavy hitting troop legions, boomers covered with some chaf units and some fast goblin cavalry to irritate the enemies flanks.

My warlock and first hero 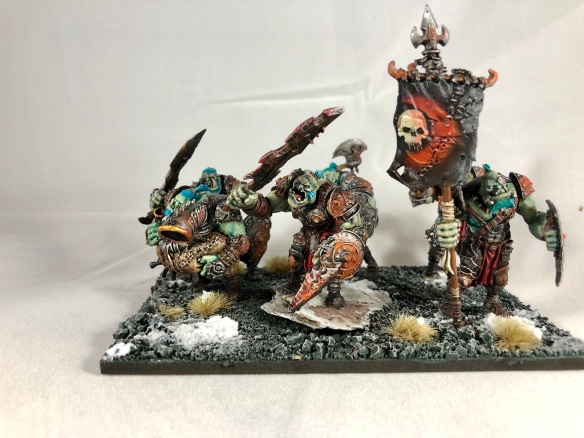 Anyway next up are another hero, and some regiments…watch this space and thanks for reading.

1 thought on “Tale of painters….catching up”